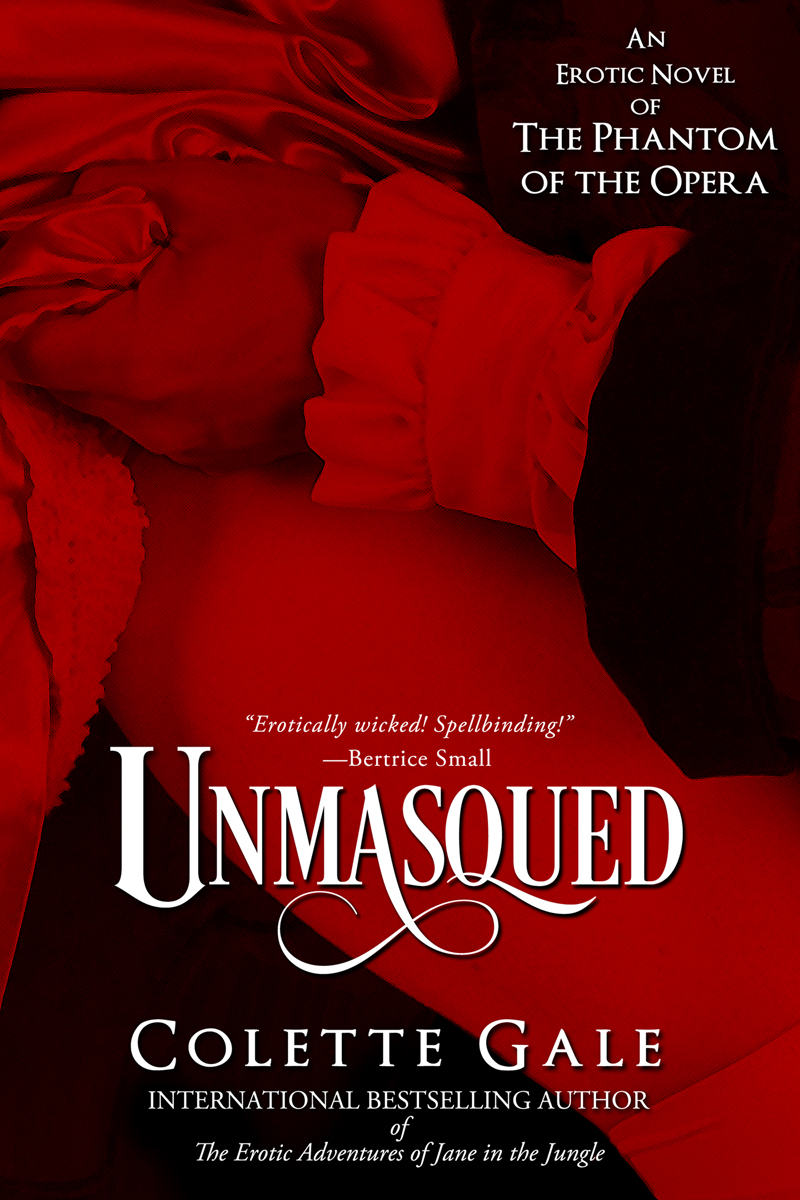 “Erotically wicked! Spellbinding! A unique retelling of The Phantom of the Opera.” —Bertrice Small

One of the world’s most infamous stories of dark passion…now retold in a novel of breathtaking historical erotica.

Christine Daaé has heard of the mysterious man known as The Phantom of the Opera. But, as the Paris Opera House’s youngest and most compelling star, Christine has learned the truth about the scarred man. In a lush hideaway beneath the Opera House, she craves the velvet timbre of his arousing voice, and quivers beneath the touch of his leather gloves.

The Phantom is real. Her Musique d’Ange. Her liberator.

And Christine is his inspiration.

Condemned to the catacombs beneath the streets of Paris, Erik watches the beautiful, talented Christine from the shadows. He is careful to keep his identity and his secret in the dark, but he cannot resist her beauty and her talent.

But his sensual power comes with a price—and a risk to everyone who stands between them.

For Christine too is succumbing to her most forbidden and dangerous desires…and as she gives everything for the Phantom, her world spirals into the darkest and most dangerous eroticism of all.

Many versions of the Paris Opera House and its alleged “Phantom of the Opera” have been told in the last century and a half. Gaston Leroux’s tale has often been considered the most accurate because it was based on official reports filed in Paris at the time of the events in question.

Hollywood, in its turn, has interpreted the book in different ways, taking dramatic license where and when the producers and directors wished. The most famous version, the wildly successful stage musical and subsequent film by Andrew Lloyd Webber, promoted yet a different version of the story.

It was not until this author received the personal diaries of Miss Christine Daae (and validated their authenticity) that the true story became known; the story which appears in this volume.

Initially, this author’s intention was to keep the diaries private in deference to Miss Daae’s family, and that of the de Chagny brothers but upon further consideration, I came to feel that in all fairness to Christine and Erik, the truth could no longer be obscured.

For decades, as the romantic, horrific legend of the Phantom of the Opera has been told, Erik has been portrayed as a murderous villain, Christine as the helpless, manipulated ingenue, and Vicomte Raoul de Chagny as the brave, lovestruck swain.

In fact, the actual events of those months at the Opera House are quite different from the official version promoted by Monsieur Leroux and the Parisian officials (most likely, in this author’s opinion, in order to protect the reputation (and influence) of the Chagny family).

Much of what is purported to be fact by these sources apparently came from a mysterious individual identified only as “The Persian,” who claimed to be an intimate of the Opera Ghost. In fact, in all research and in the documents that make up the basis of this author’s studies, there is no such person or entity either described or alluded to. It can only be construed, then, that this mysterious personage was merely a figment of the imagination of Leroux and the Parisian officials created in their attempt to clear all blame from the Chagny brothers.

Thus, the story which appears in this volume is taken directly, and in all explicit detail, from the diaries and journals of Christine Daae I have also included information gleaned from her personal letters from the ballet mistress, Madame Maude Giry, with whom Christine apparently developed a deep friendship after the events described herein.

This, then is the entire story of Christine, Erik and the Chagny brothers–the truth, once and for all.